“The Girl Who Loves Rocks”: Hillary Fredrickson Engaged After an Elaborate, All-in-the-Family Proposal 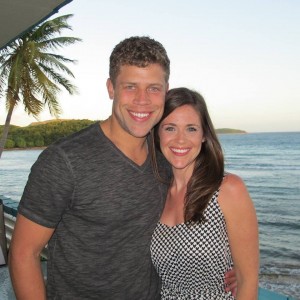 There’s plenty of love in the air at Stones Jewelry lately, and it’s not all due to Valentine’s Day’s fast approach. Our own Hillary Fredrickson is getting married, and we’re so excited to share the beautiful story of her engagement!

About a year ago, Hillary’s cousin contacted her saying that a friend of his, Chaz, was moving from California to take a coaching position at Wheaton College. Little did we know that a semi-permanent smile would stay on Hillary’s face from that day forward: the kind of smile that makes the rest of us feel happy and in love. And while we all knew an engagement was coming, none of us are quite sure we could have aced it just as Chaz did.

“I wanted to build the proposal around something special to Hillary,” explained Chaz after the fact. “She’s been deeply involved in the Mission Church community this year — we both are involved with the church — and a vision started to build in my mind…”

Weeks ago, Chaz met with the couple’s pastor, Jon Peacock, to ask for his assistance with a creative proposal idea. Falling right in time with a Marriage Series at the church, the two began work on a plan to include the couple in a service. 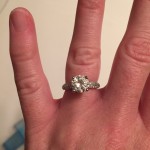 During the same period of time, Chaz met with Hillary’s father to get his blessing and with Dave Petti, Hillary’s uncle and the owner of Stones Jewelry, to begin work on the perfect engagement ring. Surrounded by settings every day, Hillary had, of course, shared her favorite with Dave. Then, to add incredible sentimental value to the ring, Chaz worked together with Hillary’s mother and aunts to make sure a “family stone” was placed within the setting: a gorgeous diamond that belonged to Hillary’s grandmother, Marilyn Johnson, a one-time co-owner of Stones Jewelry who recently passed on.

A couple weeks into the process, Hillary and Chaz received an email from their pastor asking if they’d take part in the sermon that coming weekend. Jon shared that he’d like Hillary to discuss her pursuit of God during her singleness, and he’d like Chaz to share about his Godly pursuit of Hillary. Hillary was so excited to be a part of the service, and immediately called her family (who all knew what was happening) to invite them.

“I don’t think we can make it. We’re actually church shopping, and want to check out another event,” her sister told her. Hillary was disappointed, buying her sister’s story whole-heartedly.

Sunday morning the two went to enroll in pre-marital counseling at the church, and then had coffee to discuss what they each were going to say… Chaz told Hillary he wanted to “make sure the two were on the same page”.

“Something really weird happened at the coffee shop,” shared Hillary. “All of a sudden, Chaz grabbed his phone and just ran out the door.”

“Yup, my parents almost gave it away!” says Chaz. “They left their house at 4am to drive in, and just happened to decide to have coffee at the same shop we were at. I needed an excuse to jump up and get them out of there before Hillary saw them, and came up with what I thought was a pretty weak story about my friend calling with a crisis.”

“I totally bought it.” says Hillary. “I was so nervous about what I was going to say on stage, that I hardly thought twice.” 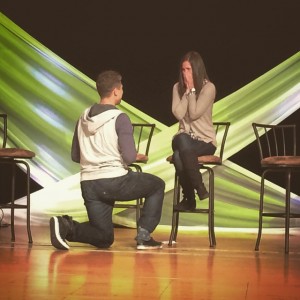 After coffee, Hillary and Chaz proceeded to the church and prepared for their parts on the stage. The service began, they were invited up and, nervous and in a blur, Hillary went first, sharing about the importance of the relationship with her mentor. Chaz responded by echoing his appreciation of the mentor relationship, as he’d planned to at coffee with Hillary, then broke script to share a spoken word poem he’d written about love.

“I was really surprised he hadn’t told me he was going to do this,” said Hillary, “but I still had no idea what was happening. I’d heard the poem before, and thought it was cool he decided to share it. Then came a ‘Part II’, and a line about ‘a girl who likes rocks’. It was then I started to catch on. I was ecstatic.”

The pictures tell the rest of the story. Hillary wasn’t the only one who burst into happy tears —  the congregation just melted and rejoiced with the couple as Chaz got down on one knee and proposed, Hillary falling to her knees with him and saying “Yes!”.

The couple’s entire family: both sets of parents, Hillary’s siblings and extended family, etc. revealed themselves from an outside, family-viewing room and they all celebrated together. Little by little, as the day went on, stories were shared about each of the ways all the different family members were involved, down to a last minute rush by Dave and Chaz to get the ring remade to fit Hillary’s grandmother’s diamond. “I used an alias, ‘Williamson’, to label the ring. It was right under your nose at the store,” Dave shared with Hillary, who had no idea. 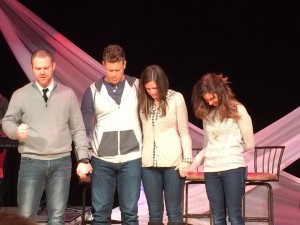 “I was so surprised!” says Hillary. “I had no idea he’d ever think of such an elaborate way to propose, and it really couldn’t have been more perfect. The pastor prayed over us right away, and the first thing we got to do was take communion together. We had so many people there to celebrate with us and, while I knew a proposal was coming, I had NO idea this was it. He really pulled off the perfect surprise.”

Hillary Fredrickson and Chaz Black will be married this June in Geneva, IL. We couldn’t be happier for them and wish our blessings over them — we’re all so excited to be a part of this beautiful love story. Congratulations, you two!