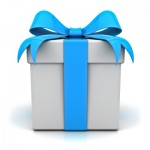 Every year around this time, Elvis comes over the radio and starts to sing about his “Blue… Blue, Blue Blue Christmas”. But this December, how about we focus on those blue birthdays, instead?

What exactly do we mean? Well, let’s start off with a little trivia for you to see if you can get the answer.

Your question: Which of the following blue gemstones is December’s birthstone?

A) Tanzanite, B) Zircon, or C) Turquoise

Answer? This was a bit of a trick question, because all three answers are correct! December is a unique month, in that it actually has three different birthstones to choose from. Let’s look at each of them a little more in depth. 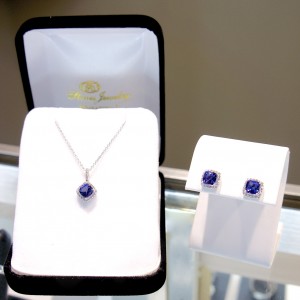 The newest addition to the list, Tanzanite was named a December birthstone in 2002 and is now the most popular blue gemstone in the Western world, next to the blue sapphire.

Discovered in 1967 by a shepherd in Tanzania, the gemstone was named after its only known location a year later by Tiffany & Co. Upon it’s discovery, the gems were mistaken for unusually vibrant sapphires, but it was soon found that they are much more complex.

Tanzanite is among the most difficult gemstones for a gem cutter to work with. Raw stones are glazed with a brownish-yellow component, which disappears when the cutter heats the stones to approximately 500 degrees. Stones must be carefully chosen and observed during the cutting process, as those with cracks or blemishes can develop fissures, and those without inclusions that survive the heating process must be removed at the precise moment they turn blue. While the surface of the stone is very pronounced in one direction, the stones can be cut in a variety of shapes.

Tanzanite is brittle, and while it can be worn daily, care should be taken to not to knock it against anything or expose it to extreme temperature changes. We recommend that you don’t use a home ultrasonic cleaning device on these stones for this reason. 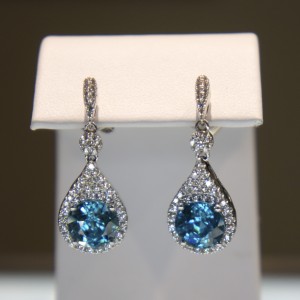 When it comes to Zircon, there’s actually a Biblical history to the stones. Not only was Zircon in the third row of gems on Aaron’s breastplate (referred to there as a “jacinth”), but it is also given to Moses in Ezekiel.

Zircon is one of the heaviest gemstones, which means that when they are compared to other gemstones of the same weight, zircon gemstones will appear to be smaller, since they weigh more.

While zircon comes in blue, the gemstone can actually be found in brown, black, red, yellow, green and colorless varieties, as well. In fact, colorless varieties of zircon can be mistaken for diamonds due to their luster. The “starlight blue” variety of zircon was created by adding heat to zircon stones in the 1920’s and have become known for their particular brilliance.

Turquoise is one of the most valuable non-transparent minerals used to make jewelry. In addition to being named a December birthstone back in 1912, it is also the official gem for celebrating the 5th and 11th wedding anniversaries.

Turquoise has a rich history as well, with records of the stone being worn as early as ancient Egyptian times. American Indians not only used the stone as jewelry, but also fixed it to the end of their bows for more precise shooting.

Pure turquoise is a fairly soft stone, ranging from 5 to 6 on Mohs scale. If interested in pure turquoise, one should be careful when making purchases, as it is often reconstituted using chips, powders, resins and plastics – be sure to ask the provider if the stones are pure.

One additional fun fact: turquoise actually didn’t get its name from its color, as many assume. The name comes from the French phrase “Pierre tourques”, which translates to “Turkish stone”. While the stone is also mined in the Southwest US today, it originally came from Turkey.

So… if you need a break from all that holiday shopping you’ve been doing, why not try shopping for those December birthdays instead?

Whether it’s a ring, necklace, earrings or set of birthstone jewelry you want for your loved one, we’ll be happy to help you pick out pieces that are sure to excite them. Stop in to see us! We look forward to helping you choose the perfect gift.

Sharing Gratitude: Happy Thanksgiving From Our Family to Yours