The January Garnet: 3 Fun Facts About This Month’s Birthstone 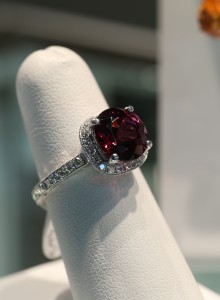 If asked about the colors of January, most Midwesterners would respond “white and grey”, as wintery weather takes over and covers each and every surface with a thick layer of snow and slush.

However, inside Stones Jewelry, January is a month of bright and vivid color. Preparing for the birthday rush, we not only have the classic (and most recognizable) red garnet on display, but garnets of nearly every shade of the rainbow as well.

Considering a garnet ring, pendant, bracelet or earrings as a gift for your January-born loved one? We’re here for you – and we’ll supply you with three trivia facts about garnet along the way:

Break Open a Pomegranate
See those tiny red seeds? They’re the reason why the garnet is named after the fruit: “granatum” being the Latin term. In fact, garnets have been exchanged as gemstones since as far back as the Stone Age.

Your True Colors
Mentioned above, while garnets are typically associated with the color red, they are also available in a wide variety of colors. Additional species of garnet include orange, yellow, green, pink and colorless stones. Blue garnets, the most rare form, were discovered in the late 1990s in Madagascar – These have the unique property of changing color from blue-green in the daylight to purple in incandescent light due to their specific mineral composition. 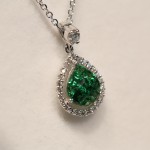 Often mistaken for the emerald, the green Tsavorite garnet is named for the National Park in Tanzania in which it was discovered. While they look almost identical to the naked eye, it’s the mineral composition that differs one stone from the other.

If you’re interested in viewing or learning more about our selection of garnets and other colored gemstones, we’re happy to help. We get almost as much excitement as you do out of picking the perfect gift, so stop in or give us a call.

Meet Our Staff: A 5-Question Interview With Gail